The Artist: American, he was born as Milton Ernest Rauschenberg in Port Arthur, Texas, 1925. He died of heart failure on May 12, 2008, on Captiva Island, Florida, after a personal decision to go off life support. At 16, Rauschenberg was admitted to the University of Texas where he began studying pharmacy. Rauschenberg subsequently studied at the Kansas City Art Institute and the Académie Julian in Paris, France, where he met the painter Susan Weil. In 1948 Rauschenberg and Weil decided to attend Black Mountain College in North Carolina. Rauschenberg married Susan Weil in 1950. After only one child, they divorced in 1953.

The Painting: Over the course of his career he created a wide variety of early works that anticipated the pop art movement. By 1962, his paintings were beginning to incorporate not only found objects but found images as well, transfered to canvas by means of the silkscreen process. Silkscreening allowed him to address the multiple reproducibility of images, and the consequent flattening of experience that implies. In this respect, his work is contemporaneous with that of Andy Warhol. Rauschenberg is frequently cited as an important forerunner of American Pop Art. Also a noted photographer, he utilized his own photography in these silkscreen works, taken during a lifetime of travels. His technique of juxtaposing disconnected images with distinctive character presents what the artist has self-described as working with the “gap between art and life.” On loan from Bellagio, LLC. Rauschenberg's 'Lucky Dream’ features found images such as a trophy, Asian cranes and tigers and the Sistine Chapel. 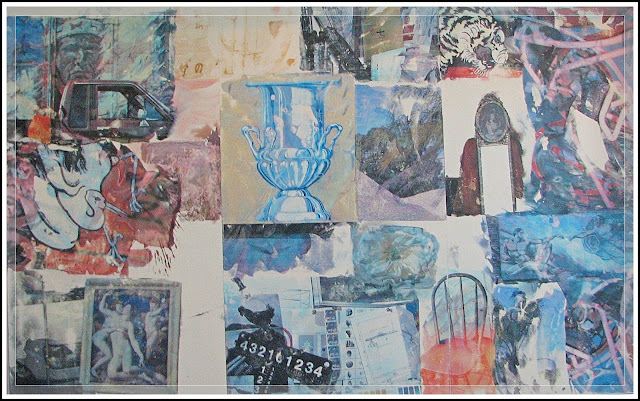 Email ThisBlogThis!Share to TwitterShare to FacebookShare to Pinterest
Posted by Ken and Connie at 12:47 AM