The Artist: Canadian, Jack Goldstein was born September 27, 1945 in Montreal, Quebec. He died March 14, 2003. As a boy he moved to Los Angeles, California and attended high school there in the 1960s. He received his training at Chouinard Art Institute and was a member of the inaugural class of California Institute of the Arts, where he worked in post-studio art under John Baldessari, receiving an MFA in 1972. Jack Goldstein’s paintings focused on imagery of natural phenomena and was among the most influential postmodern artists of the 1970s and ’80s and is widely recognized for his pioneering work in sound, film and painting. As the 1980s continued and finally fizzled out there was less and less call for "salon paintings" and Goldstein's work sold less well than some others'. Reluctant to teach rather than practice full-time, Goldstein left New York in the early 1990s and returned to California where he lived out the decade in relative isolation. His early work was revived at the turn of the century and he resurfaced briefly to some renewed acclaim. He was featured in the 2004 Whitney Biennial as a major film influence alongside Stan Brakhage, less than a year after he committed suicide by hanging himself in San Bernardino, California on March 14, 2003.

The Installation: The painting below, acrylic on canvas, titled Untitle (Volcano), was one of his best examples of capturing the “spectacular instant;” in this case, a volcanic eruption, 1983. It is located in the Tea Lounge on the 23rd floor of the Mandarin Oriental, Sky Lobby. 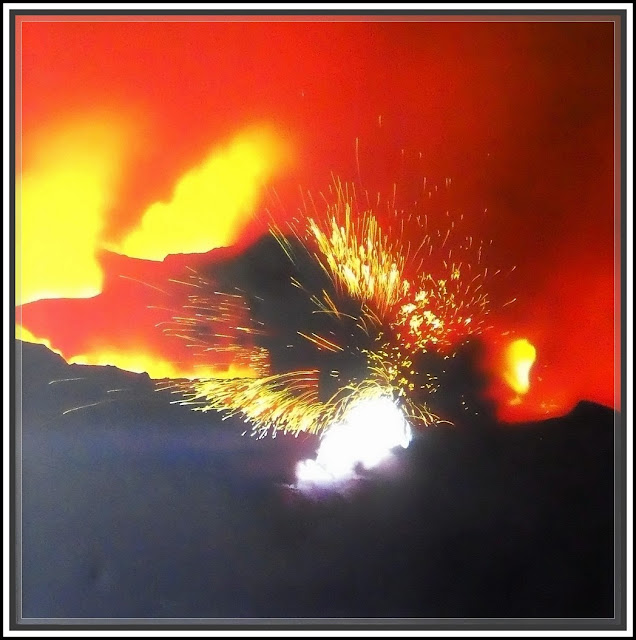 Click to return to the ... Index-for Artworks and Sculpture
or go to The Art & Architecture of Las Vegas - Index

Email ThisBlogThis!Share to TwitterShare to FacebookShare to Pinterest
Posted by Ken and Connie at 10:17 PM