The Artist: American, Maya Lin was born on October 5, 1959 in Athens, Ohio. Lin studied architecture and sculpture at Yale University, where she received a Bachelor of Arts degree in 1981 and a Master of Architecture degree in 1986. She has also been awarded honorary doctorate degrees from Yale University, Harvard University, Williams College, and Smith College. She was among the youngest at Yale University to receive an honorary Doctorate of Fine Arts in 1987. She received her bachelor's degree from Yale, where she studied .In her senior year she won a nationwide competition to create a design for the Vietnam Veterans Memorial.

The Installation: Maya Lin is considered one of the most important artists of the 21st century. Her remarkable body of work maintains a careful balance between art and architecture, including many large-scale, site-specific installations, intimate studio artworks and architectural works and memorials. She became famous for her design of the Vietnam Veterans Memorial in Washington, D.C., and is well known for contemporary land sculptures and interior art installations that encourage environmental consciousness. The concept of the sculpture came from the spirit of CityCenter’s commitment to sustainability. ARIA is the world’s largest hotel to achieve a LEED Gold rating. Lin's “Silver River” sculpture was inspired by the boundaries and topography of the Colorado River as it carves the western desert landscape of the United States. It weighs 3,700 pounds, hangs from steel cables, slants horizontally and swells at two points of its winding journey - at Lake Powell and Lake Mead. Topographic steps provide a sense of volume to the body of water. In light of Nevada’s standing as “The Silver State,” Lin cast her creation in reclaimed silver. Elegant, graceful and floating before a panoramic window, it provokes contemplation. She had been quoted as saying, “I’m asking people to take a look at the natural world around them. You want to get people to think of rivers as an entire ecosystem. You want to talk about a river as a volume of water, as an object rather than a ‘flow.’ ” 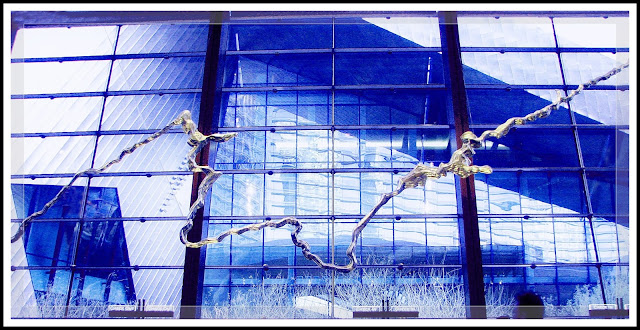 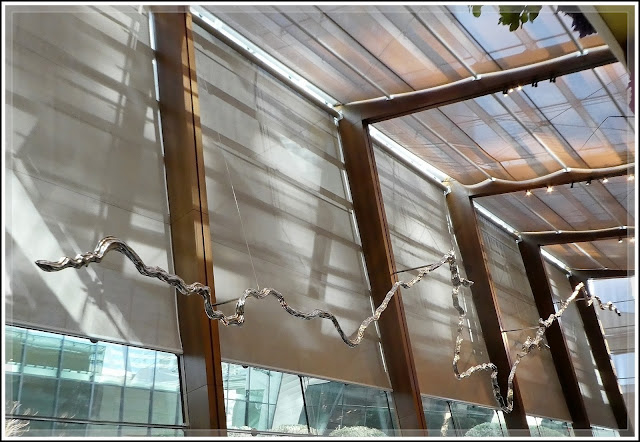 Click to return to ... The Art & Architecture of Las Vegas - Index
Email ThisBlogThis!Share to TwitterShare to FacebookShare to Pinterest
Posted by Ken and Connie at 9:12 AM