{Click on an image to enlarge, then use the back button to return to this page}
This page last updated on 03/18/2018


Introduction: As I began to discover more and more rock art sites during my hikes over these past several years, I have become witness to far too many examples of where persons had seemed fit to deface them with graffiti and other examples of damage. Eventually I realized that the sharing of my hiking adventures could have the potential to increase public exposure, and thereby increasing the possibility for even more damage. As a result, I decided to preface each of my rock art pages with the following information to help educate visitors about the importance of these fragile cultural resources. Before scrolling down, I implore you to READ the following ... as well as the linked page providing guidelines for preserving rock art. 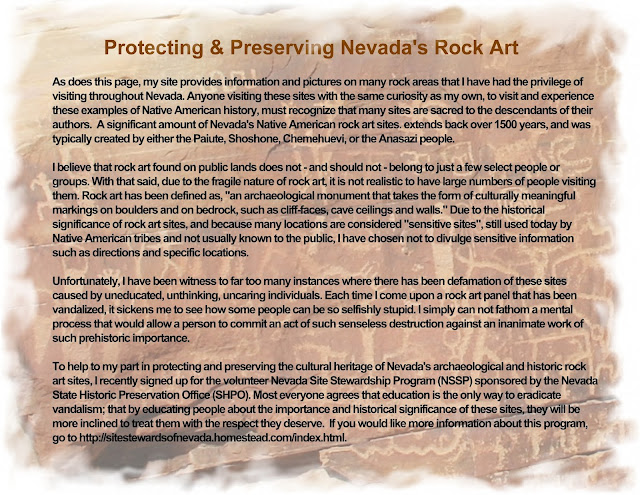 02/05/2014 Trip Notes: This area is full of what seem like large piles of red and white sandstone outcrops (Figs. 01 & 19). The desert varnish on many of these rocks have made for a fascinating rock art gallery that is filled with dozens of ancient petroglyphs (Figs. 20 thru 23). Though we did not spot any, it is said that there are some agave roasting pits and a prehistoric campsite. The actual trail is only about 0.3 miles, but the last bit of the route requires an easy scramble among the rocky sandstone crags. Unfortunately for us, we just missed two of the more famous panels, the “Falling Man'” panel (Fig. 12) and another large panel called “Newspaper Rock” (Fig. 20) that my friend Kathy Pool found on her last visit. The good news is that we did locate several new petroglyph panels. We found several panels that were located high up on some of the sandstone outcrops (Figs. 22 & 23). It seems that the farther you go and the more you look, the more rock art you can find. No matter where we hiked here, there were beautiful views (Fig. 24) in almost every direction. Hopefully, future visits will yield even more petroglyph findings.

Newspaper Rock: Newspaper rock or "picture rock”, as it is sometimes called because people like to have heir picture taken in front of it (Fig. 20). Some archaeologists believe that this panel has glyphs from three time periods, archaic, anasazi and patayan. The archaic glyphs are the oldest and are typically curvilinear or rectilinear in form; the Anasazi glyphs are identified as people or animals having “full formed” bodies, and the patayan people typically are more “stick” figures with large hands and/or feet. Likewise the animals are more like stick figures. It is also one of the few panels in the area having “burden baskets” which can be found on the left side of the panel. Burden baskets are cone shaped, with flat or rounded bottoms. The baskets were once made for every day use in collecting or gathering wild foods, or to cultivate crops like corn. Large burden baskets were sometimes made for food storage. You will see how the Bat Clan (many, many bat clan symbols in the area) documented the good years (full burden baskets) and the bad years (empty burden baskets) with wonderful petroglyphs. You can visually see their plea to rain god Tulilic, as the Kokopelli lays on his back to play his flute to the sky world.

Email ThisBlogThis!Share to TwitterShare to FacebookShare to Pinterest
Posted by Ken and Connie at 12:12 PM