Cottonwood Cove: Cottonwood Cove is situated at the banks of Lake Mohave on the Nevada-Arizona border in Clark County, Nevada, just 13.5 miles east from the center of historic Searchlight, NV. Lake Mohave is approximately 67 miles long and is backed by the Davis Dam about 26 miles downstream at Laughlin, NV. This resort area is one of the best Large Mouth Bass fisheries in the West. Its marina has boat rentals, campgrounds, fuel, a cafe', marina store and a motel.

Walking Box Ranch Road: In the center of Searchlight, NV-164 (Nipton Rd.) heads west towards the California town of Nipton and the I-15. About six 6 miles out you come to the graded, yet quite bumpy, Walking Box Ranch Road which turns south towards the Walking Box Ranch. As far back as the 1890s, this section of desert was home to a 400,000 acre working cattle ranch. Besides the ranch site itself, many of these old corrals, water troughs, and other ranch features still remain scattered throughout this desert area. 12-15 miles out the Castle Peaks and the New York Mountain range provide nice views and hiking opportunities. 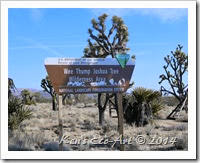 Wee Thump Joshua Tree Wilderness Area: At first glance, this flat, gently sloped alluvial plain between Searchlight and Nipton appears rather plain and boring; however, it offers a wide variety of plant life and occasionally, for the patient, glimpses of birds, lizards and other desert animals.Wee Thump Joshua Tree is a relatively small (6,050 acres) wilderness area established to protect a forest of dense, old-growth Joshua trees. The wilderness area is relatively flat, sloping gently from west to east at elevations ranging from about 5,000 to 4,100 feet. The area lies on the bajada below the South McCullough Mountains. 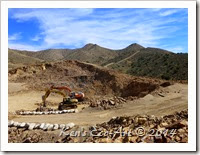 Crescent Peak and Crescent Peak Mine: The Crescent Peak mine (aka, Wood mine; Simmons mine, Turquoise mine, Aztec claim, Right Blue claim is located 12 west of the town of Searchlight, along the west flanks of Crescent Peak. At 5,994 feet, Crescent Peak provides views of the Ivanpah Valley, as well as the peaks of McCullough Mountain, Hart Peak, Castle Peak, Clark Mountain, Kingston Peak, and Spirit Mountain. 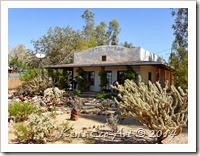 Nipton California:Two miles from the Nevada/California border in east San Bernardino County, Nipton is about 10 miles west of Searchlight. Billed as, “The Gateway to the Mojave Desert”, today, Nipton is a privately owned, unincorporated town in San Bernardino County, California, on the northern edge of Mojave National Preserve, with a population of nearly 60 people. It has a historic hotel, eco-lodges, gift shop and a cafe.

History of Searchlight: Searchlight is at an elevation of 3,540 feet. It was established in 1898, after the discovery of Gold in 1897. Initial discoveries of predominately gold ore were first made at this location on May 6, 1897 by G. F. Colton who filed the first claim, later to become the Duplex Mine. The Searchlight Mining District was founded July 20, 1898. The Quartette Mining Company, formed in 1900, became the mainstay of the Searchlight District, producing almost half of the area's total output. By October 1898 a post office and camp were in place roughly 3/4 of a mile from the original mine site. By the winter of 1899 the population increased to a point that one could call it an official town. Searchlight began to boom in 1902 In May, 1902, a 16-mile narrow-gauge railroad was built down the hill to the company's mill on the Colorado River. On March 31, 1907, the Barnwell and Searchlight Railroad connected the town with the then main Santa Fe line from Needles to Mojave. The busiest times for Searchlight were in 1907 thru 1910. There were many gold and silver mines that were excellent producers in the Searchlight Mining District. According to Geological Survey Paper 610, most of the Searchlight District’s gold and silver production came from the Duplex and Quartette Mines. The greatest activity, were between 1902 thru 1916. A reported 246,997 ounces of gold was produced from the lode mines. As a typical mining town, it had a reported population of 1,500 people. In fact, at the time it was larger than Las Vegas. Some reports say that it boomed to a point of 5000 people with over a dozen saloons, a telephone exchange, and 44 working mines. A panic hit between 1907 to 1910 where low grade ores needed more capital for continued mining. By 1919 trains were operating over the B and S Railroad only twice a week, and after a severe washout on September 23, 1923, halted traffic completely. Train service was never restored. When gold and silver mining production cost went up and the grade of the ore went down, people started to move on to the next boomtown. By 1927 the town’s population had dwindled to approximately 50 people. After many years of drifting off a new mill was built in 1934, but ended up shutting down just after 1935 due to lack of ore. Up to 1940, it is reported that total production amounted to $4.5 million.

How it got its name is still a mystery, however there has been much speculation. Some think it came from the name off a box of matches; according to a 1907 Searchlight Bulletin newspaper, there are several stories reported about the naming of our town, but the most popular is the one about Mr. G.F. Colton, while lighting his pipe with a Searchlight brand match (mfg. by the Diamond Match Co.) saw some rocks which contained stringers of gold, staked that claim and named it Searchlight. Another version is that a couple of prospectors, Mr. G.F. Colton and his partner Mr. A.E. Gus Moore, were in the area and one said to the other, “That rock contains gold!” His partner supposedly said, "If there's gold in that rock, you would need a searchlight to find it?" Another is that searchlights were once used to guide patrons into the brothels that were in area. Hence the town was named so Searchlight. I’ll leave it to you, to take your pick on the naming of Searchlight.

Over the past decade the town’s population has continued to decline. Today the Searchlight community has less than 500 residents. With the majority being retired, it struggles to support an eclectic mix of miners, ranchers, small business owners and artists. Its main attraction is the Cottonwood Cove Resort and Marina, located inside the Lake Mead National Recreation Area and administered by the National Park Service. Only fourteen miles down the hill is beautiful Cottonwood Cove, one of the best Large Mouth Bass fisheries in the West. The marina has boat rentals, campgrounds, fuel, a cafe', marina store and a motel. In addition, it is know for a history that includes many famous names: Clara Bow, Rex Bell, Edith Head, Louis Meyer, LT William Nellis, U.S. Senator Harry Reid, John Macready, James Cashman, and an endless list of colorful and fascinating characters that are fodder for the legends of the old west. Scott Joplin, who never lived in Searchlight, was so intrigued by the stories of his composer friend, Tom Turpin - who had spent time in Searchlight in his youth - that he composed a song called the Searchlight Rag.


Email ThisBlogThis!Share to TwitterShare to FacebookShare to Pinterest
Posted by Ken and Connie at 9:25 AM