Picture Notes: The picture of the Mule in (Fig. 01) was taken on 03/18/2016 while hiking around Goodsprings Valley behind the town of Goodsprings, Nevada.  The pictures of wild Burro in (Fig. 02) was captured on a drive through Red Rock Canyon Park. For more on these Burros go to ... Wild Burro (Donkey) - (Equus - asinus). 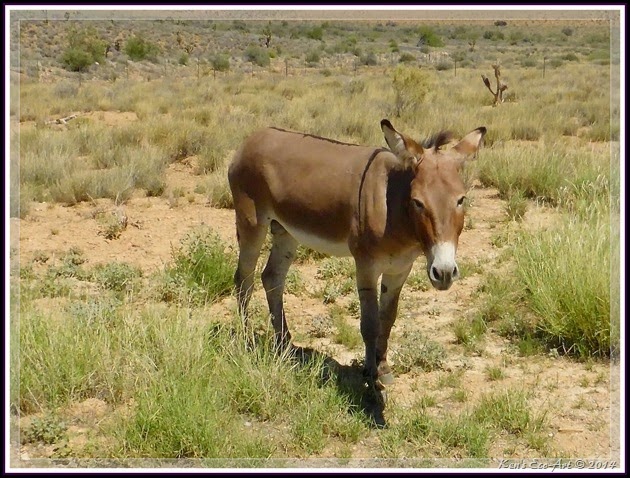 Description: Because Mules do not constitute a species, there is no scientific name for mules as a species. The reason mules are not considered a species is because mules do not reproduce - they are hybrids, the offspring of a male donkey (called a jack) and a female horse (called a mare). Mules are almost always sterile (except that, on rare occasions, a female mule can be fertile).
Mules inherit desirable qualities from both donkeys and horses; from the horse they inherit strength and stamina, and like donkeys, mules are generally patient, sure-footed, intelligent and have an even temper. Donkeys have long ears, a short thick head, a short mane, thin limbs and narrow hooves (Fig. 02). Mules share these characteristics with donkeys but they are larger and taller than donkeys. The physical characteristics that mules share with horses include shape of the body, a uniform coat, and teeth (Fig. 01). The hooves of a mule are harder than those of a horse. The coat of a mule is usually brown (sorrel). Mules have longer ears than horses but usually somewhat smaller than donkey.

Mules have several advantages. Mules have tougher and less sensitive skin than horses. They can live as high as 50 years when compared the the horse's 30-ish years. They need less food, pound for pound, than horses due to a much more efficient digestive tract. Pound for pound mules are also stronger than horses and have a better stamina and agility. Because they are typically much larger than donkeys, they can carry a greater weight. Mules don't spook as easy as horses do and have a strong "self preservation" sense making them a better companion in a fight with wild animals. Finally, mules endure heat and lack of water much better than horses, and are built more for desert life.

Major differences between a wild burro (Donkey) (Equuis asinus) and a Mule: The main difference between a donkey, mule, and a horse is genetics. Beyond the genetic difference, you can easily tell the difference between a donkey and a mule by a few different physical markers. The easiest thing to spot is that mules are usually larger than donkeys (often significantly so), much more closely resembling a horse in size. Another easy difference to spot is that, in the summer, a mule’s coat tends to more closely resemble a horse’s, rather than the longer, coarse hairs of a donkey. However, in winter mules tend to develop coats that more closely resemble a donkey. Besides physical and genetic differences between a mule and a donkey, you can also tell the difference just by hearing them make noises. Donkeys make a very distinctive hee-haw type sound. Mules make a sound that is something of a cross between a horse’s whinny and the donkey’s hee-haw, often starting as a whinny and melding into a hee-haw.

Email ThisBlogThis!Share to TwitterShare to FacebookShare to Pinterest
Posted by Ken and Connie at 8:28 AM