What is Rock Art? Perhaps a more appropriate title for this category would have been "Rock Art" versus Petroglyphs and Pictographs. The more general term of rock art includes three generally accepted types of ancient image creation: petroglyphs, pictographs, and geoglyphs. 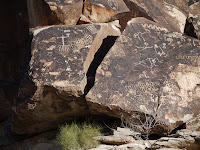 Petroglyphs (also called rock engravings), the most popular, are pictogram and logogram images that are carved or pecked on rocks or rock walls. Most often a small hard stone was used (direct percussion) to carve or scratch the rock surface by incising, picking, carving, and abrading. Sometimes hammer-stones and stone chisels (indirect percussion) were used. In soft sandstone they could be simply scratched into the surface (incised). Because the grooves making up designs are usually not very deep, they can be very difficult to see. They are best viewed when the sun is at a low angle to the rock, usually early or late in the day.

Desert Varnish: This is the dark reddish or black ceramic like sheen covering on most rocks that contain petroglyphs. It is created by bacteria living on the rock and is sometimes only one-hundredth of a millimeter thick. Because it can sometimes take up to 10,000 years for the varnish to develop a deep sheen, scientist can estimate the age of petroglyphs and other artifacts by the maturity of the varnish on them. 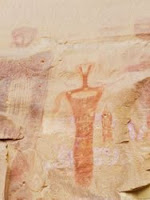 Pictographs, on the other hand, are painted onto the rocks, using brushes, fingers or even spray painted with the mouth. Because one had more control in their creation, they are often more graphic and detailed than petroglyphs.


Geoglyphs, sometimes called intaglios, are images made in the desert floor by scraping away stones to make a design. They are often created by moving or arranging stones or earth or other objects within a landscape. Similar in idea to "crop circles", these giant ground paintings depict geometric designs, human form and animal figures. The Blythe Intaglios, located approximately 15 miles north of Blythe, California, just west of the paved road running along the Colorado River, are considered one of the best known sites.

Email ThisBlogThis!Share to TwitterShare to FacebookShare to Pinterest
Posted by Ken and Connie at 9:11 AM