{Click on an image to enlarge, then use the back button to return to this page}
This page last updated on 10/11/2017 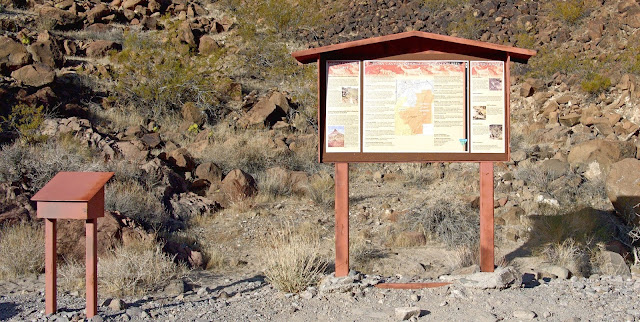 The Sloan Canyon Petroglyph Site is a National Register-listed property in the Sloan Canyon National Conservation Area, Clark County, NV. In 2006, both the Bureau of Land Management (BLM) and the Nevada Rock Art Foundation (NRAF) studied the area and gathered data for future assessments.

In 1997/98, the Harry Reid Center for Environmental Sciences (HRC) and the Far Western Anthropological Group in 2004, performed an inventory of the site’s rock art and defined its spatial characteristics and established its boundaries. Dividing the site into four sections (Lower Canyon, Middle Canyon, Upper Canyon, and Narrows, identified some 318 rock art panels at the site, distributed over approximately a mile. HRC noted that each section was composed of varying numbers of locations, with the greatest concentration of rock art panels noted in the Middle Canyon and Narrows areas of the site, which are located midway through the canyon. In 2004, Far Western supplemented this record with the identification of 14 additional rock art panels and 7 archaeological features. The results of these archaeological surveys indicate that the Sloan Canyon area has evidence of Middle Archaic, Late Archaic, Puebloan, and Late Prehistoric occupation, mainly connected with resource procurement and processing.

The Sloan Canyon petroglyphs style have been classified as predominantly Basin and Range Tradition in character. Abstract motifs account for about 89 percent of the 1133 motifs present. Circular forms are more frequent motif types than rectilinear designs or variants of lines. In terms of numbers of panels, though, these three broad forms occur in roughly equal quantities, but variants of lines are slightly less common. In general, there is little spatial variation across the site in the distribution of abstract motif types; i.e., discrete spatial patterning in the occurrence of the three broad abstract types is not discernible. 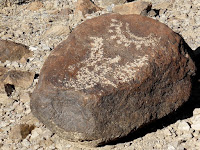 Some specific abstract motif types are, however, localized in their distribution. So-called “necklace” designs (two nested arcs outlined by a row of dots that follows the contour of the outer arc) are found only in Upper Canyon I. Possible “atlatl” representations are rare, but seem to be concentrated in Middle Canyon I. If these really are schematic “atlatls,” then this might indicate a Middle Archaic date for some rock art production at that location. 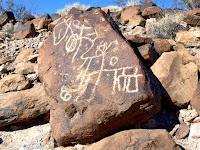 Overall, the abstract imagery at the site exhibits a tendency to open forms, sometimes with other motifs inside. Its opaque references probably encouraged ambiguity in the cultural interpretations attached to it by its users, perhaps indicating that it functioned to provide an exegetic space for the expression of competing social narratives, a common function of visual symbolism. Alternatively, it may have had very specific cultural meanings for its users, meanings that an external observer cannot “read” based simply on a visual consideration of its properties. 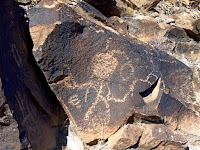 Some art may be more performative in its motivation than other types. Simple vertical lines, usually occurring singly, account for about 10 percent of all motifs at the site. As these are not related to other design elements they may be related to practices where leaving a mark was the main motivation. Figurative forms tend to evoke greater interest from modern observers of rock art, largely because their apparently representational nature gives us a false confidence that we can identify its subject and cultural references. These motif types also bear the burden of style definitions in rock art studies as stylistic variation is easier to recognize in forms for which the apparent theme or subject can be identified. 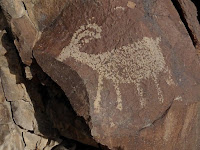 Representational forms are statistically a small component of the Sloan Canyon rock art assemblage, only about 11 percent of all motifs but approximately 23 percent of all panels. Anthropomorphs outnumber zoomorphs in the number of panels in which these are present, but zoomorph motifs are slightly more frequent than anthropomorphs. In general, anthropomorphs tend to be represented singly in contrast to zoomorphs, a greater proportion of which are depicted with other zoomorphs. 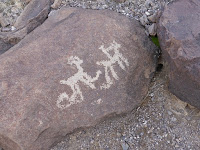 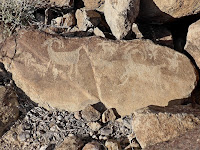 Although the archaeology of Sloan Canyon NCA documents the presence of Puebloan, Patayan, and Southern Paiute peoples (among others), these cultural identities seem to be only weakly expressed through the site’s rock art. If the rock art did function to construct and communicate cultural identities with external groups, it did this in a way that we cannot apprehend through its motif assemblage. Some rock art is directly associated with milling features and the general archaeological context of the site’s art is one of resource acquisition and procurement, and temporary habitation for task-specific purposes. The informing context in which prehistoric populations would have used and encountered the site’s rock art is one of daily economic and social routines. 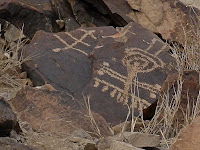 The art is generally not in spaces that can be considered private (other than the few panels that are up high above the canyon floor and that are difficult to access) and largely is placed in natural traffic corridors or activity areas. Therefore, it is likely that Sloan Canyon’s rock art negotiated and expressed social identities experienced in the routines of daily social life. The art may have been used in a cultural discourse that allowed people to reflect on the lived experience of social and domestic routines, providing a physical embodiment of a social memory that transcended individual experience.

Click here to return to - Sloan Canyon Petroglyph Gallery - 01/21/2016 Trip Notes
Email ThisBlogThis!Share to TwitterShare to FacebookShare to Pinterest
Posted by Ken and Connie at 8:23 PM