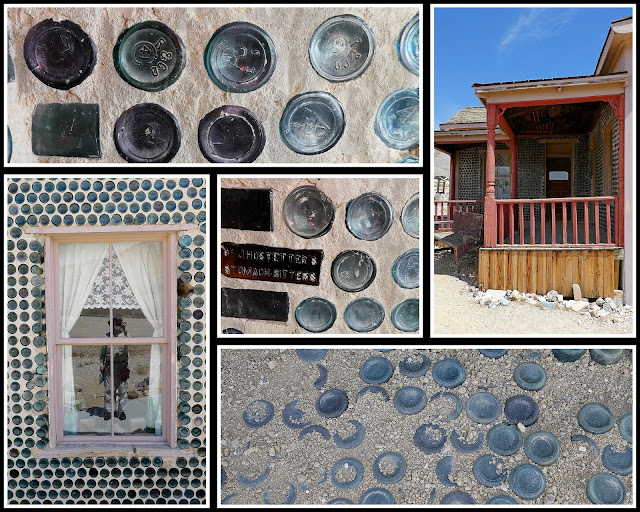 Polyptych Description: Shown below is Tom Kelly's 'Bottle House' in Rhyolite, NV.  Tom Kelly's house was erected in 1906. He built the three room house to raffle it off. It was built with 30,000 bottles of beer, wine, soda and medicine. Because the water line had yet to be laid, water was scarce and cost $5.00 a barrel. As a result, none of them had ever been washed. The house served the winning family for many years. Even though you cannot go into the house, you can peer into the inside through its windows, seen in the polyptych above. One was even draped with curtains. He even made a landing for the porch with bottles. when you got close up you could read the labels molded into the bottoms of the bottles. NOTE: This was not the only house built from bottles in Rhyolite. Just about 100 yards behind this one, was Mr. & Mrs. Wylies home. It was only one room but it was quite a nice little place made of beer bottles. There was also one up on the hill behind the school. That one was quite unusual in that it was mostly underground. Other than the roof, the rest of the house was made of bottles. 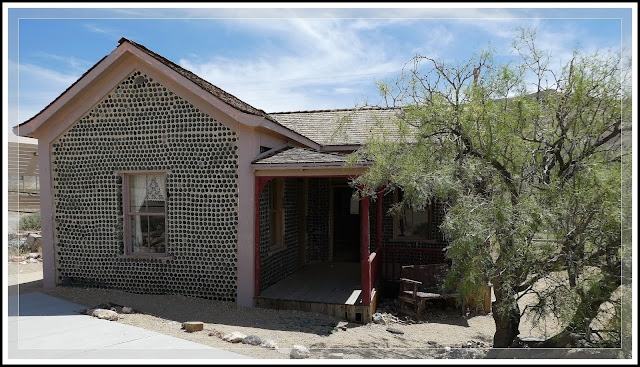 Email ThisBlogThis!Share to TwitterShare to FacebookShare to Pinterest
Posted by Ken and Connie at 8:11 AM