{Click on an image to enlarge, then use the back button to return to this page}
This page last updated on 11/19/2017
What is it? Seven Magic Mountains is one of the largest land-based art installations in the United States. This large-scale, site-specific public artwork was nearly five years in the making. The installation is comprised of seven individual towering sculptures, mediating between geological formations and abstract compositions. Its seven colossal stone forms defy gravity with their teetering formations (Fig. 01). The shapes, reminiscent of naturally-occurring hoodoos, seem poised between monumentality and collapse. The mammoth contemporary cairns evoke the art of meditative rock balancing, and mark Rondinone's  place in the history of Land Art. I converted the picture in (Fig. 02) to provide a faux "oil painted" look.

At first glance, one might think that these totems might be be made of lightweight polyurethane. But this is far from the truth. Each of the sculptures consists of locally-sourced limestone boulders stacked vertically in groups ranging between three and six boulders (Fig. 03), each weighing an average of 40,000 lbs, with the largest weighing just over 60,000 lbs. Over a period of five years they were carefully cut, shaved and drilled. Heavy steel rods were then inserted through each boulder to hold them together. Each stone boasts a different fluorescent color and each individual totem stands between thirty and thirty-five feet high - it's like a psychedelic Stonehenge.

Where is It?  This sculpture is situated on the far southern end of Las Vegas Boulevard along Interstate 15, approximately a half hour from downtown Las Vegas. Just off the boulevard there is a large gravel graded parking area (Fig. 04). Positioned within the Ivanpah Valley and surrounded by mountains, the piece will be on view for two years that began May 11, 2016. Its been estimated that approximately 16 million vehicles will pass the work over its two-year installation, making it one of the most visible works in the history of Land Art.” 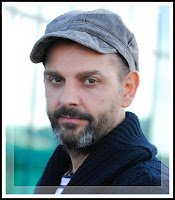 Who is The Artist? Ugo Rondinone, born 1964 in Brunnen, Switzerland, lives and works in New York and has long embraced a fluid range of forms and media. By allowing himself such formal and thematic freedom, Rondinone creates the conditions for an expansive emotional range. His work has become recognized for its ability to channel both psychological expressiveness and profound insight in the human condition and the relationship between human being and nature. Referring concurrently to the natural world, romanticism and existentialism, his works encapsulate a “mental trinity” that has underpinned his art for more than twenty years. 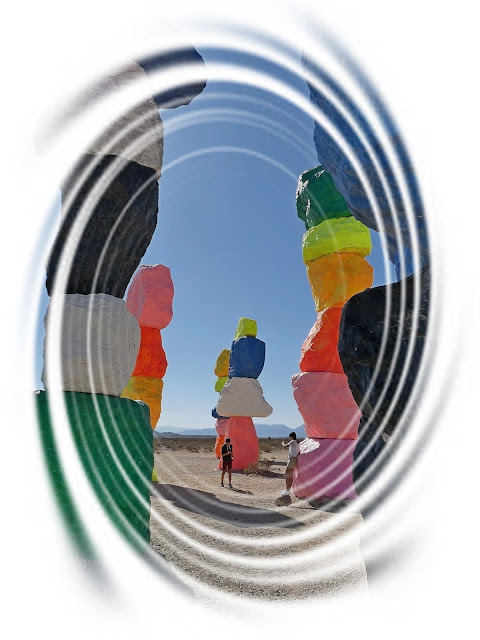 Bonus: On our way to visit this installation, we went via the towns of Goodsprings and Sandy Valley. Out behind Goodsprings we spotted small herd of nine wild horses way off in the distance (center of Fig. 05 - Click to enlarge). Using the 720mm zoom lens on my camera, I was able to better capture some nice pictures of these beautiful horses (Figs. 06 & 07).

Email ThisBlogThis!Share to TwitterShare to FacebookShare to Pinterest
Posted by Ken and Connie at 6:44 PM