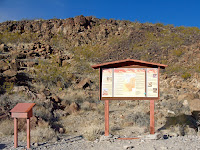 This past week I hiked with the Rockhounds from the Henderson Senior Center to the Sloan Canyon National Conservation Area in Henderson, south of Las Vegas. The Sloan Canyon Petroglyph Site is one of the most significant cultural resources in Southern Nevada. Archaeologists have recorded 318 rock art panels with approximately 1,200 individual petroglyphs that were created by native cultures ranging from the Archaic to the historic era. Over the past five years, I have visited this site three times and captured more than 100 pictures of petroglyphs and the surrounding area. Click each of the links below to view pictures and descriptions of the area.