{Click on an image to enlarge, then use the back button to return to this page}
This page last updated on 04/18/2018


11/27/2012 Trip Notes:  After hiking some mines along Sandy Valley road, Harvey Smith and I drove around town and then stopped here for a beer and lunch in the Ghost Town Café (Fig. 02). The “fix-it-yourself” hamburger bar has at least 10 items on it and the 1/2-lb certified Angus COWBOY BURGER was very good. Would definitely eat here again. 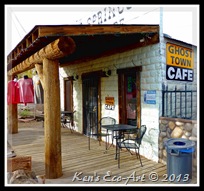 Around this time Samuel Yount established what was known as the General Mercantile store, which was later purchased by Clark County commissioner and prominent business man, George Fayle. Next, it is said that Fayle built the Goodsprings Café (now known as the Ghost Town Café), where he lived for a time while he built the Pioneer Saloon in 1913. In 1916 he then built the Fayle Hotel. Over the years, both the General Mercantile and Fayle Hotel were destroyed by fire, leaving the Pioneer Saloon as the only survivor. This now 100-year old historical landmark is thought to be the last of its kind in the U.S. The interior and exterior walls are of stamped tin that was manufactured by Sears and Roebuck. Its legendary bar, installed in 1913, was manufactured by the Brunswick Company in Maine in the 1860's and still has the original brass foot rail installed when the bar was built. While drinking and conversing at the ornate cherry wood bar (Fig. 03), you will find yourself surrounded by original poker tables, a vintage potbelly stove (Fig. 04) and a stylish fishnet-stocking leg lamp (Fig. 05). Even though many movies have been filmed here, the genuine stories of the Pioneer Saloon continue on from the echoes of the past.


To truly understand just how historic the saloon is, you actually have to go all the way back to the 1860s. At about the time Nevada was admitted to the union (1864), there was a mahogany bar built in Brunswick, Maine. You probably recognize the Brunswick name if you’re a fan of billiards. This bar journeyed by sea from the East Coast, around Cape Horn (before the Panama Canal existed), to San Francisco. From there, it traveled via ox-wagon to Rhyolite, a Nevada mining town that went bust nearly as soon as it boomed in the early 1900s. It was put it back on a wagon and brought down to Goodsprings, and has been sitting here ever since. Now that’s history.
One of the many of the stories that can be heard is about the famous gunfight that took place over a poker game inside the saloon on July 3rd, 1915. During a poker game, a man named Paul Coski was caught cheating and during a scuffle between him and another man named Joe Armstrong, Mr. Coski was shot several times and killed. “Those were the rules of the West: You don’t steal horses, and you don’t cheat at cards,” as Tom, son of the owner and current bartender says. The bullet holes are still in one of the pressed tin walls of the Pioneer Saloon Fig. 06). The full story typed out by W. H. Harkins , is found hanging on the wall above the bullet holes. Mr. Harkins was a coroner working at the Justice Of The Peace office in Las Vegas and the story on the wall was actually the telegram sent over to Paul Coski's brother Davis Coski. A copy of the coroners report is available in the online store or at the Goodsprings General Store located next to the Pioneer Saloon.

As far as lore goes, the saloon is more widely known for its remembrance of the famous actress Carole Lombard (Fig. 07). Lombard, was selling war bonds at the time. During a cross-country flight gone wrong, Lombard, her mother, and several military personnel died in a tragic plane crash on nearby Mount Potosi on January 16, 1942. Today, the billiards room behind the bar pays tribute to the memory of Carole Lombard. On its walls you'll find numerous newspaper clippings detailing the saloon's long history (Fig. 08). In a melancholy mood, many detail the crash of the DC-3 that killed her. Because the search party started at the saloon, her equally-if-not-more famous husband of less than two years, Clark Gable, spent three heart-wrenching days days at the corner of the bar drowning out the wait for the search party to come down with the terrible news on her unlucky fate. You can read this tragic story on an original newspaper and see a piece of the actual wreckage.
On May 13, 1916, the Fayle Hotel (Fig. 09), built at a cost of more than $27,000, opened to great fanfare. It was two stories in height and 41 x 120 feet in size. The woodwork throughout was slash grained Oregon fir. Both stories were surrounded on 3 sides by 8' wide verandahs. The furnishings were selected from Barker Bros. store in Los Angeles at a cost of $5,000. Featuring all the modern conveniences: electric lights, hot and cold water, full bath areas and even speaking tubes connecting upstairs rooms to the desk clerk, the hotel was billed as the finest in all of Nevada. Being right next door to the Goodsprings Saloon, the hotel that not only served as a comfortable rest place for the many prospectors and miners who came to drink and blow off steam, it also served as a popular place where street girls would frequent and provide services to the bars clients. Sadly, Hotel Fayle burned down in 1966, ending a prosperous 53 year relationship between these two establishments.

Shortly after the hotel burned down, Don Hedrick Sr. ran the Pioneer Saloon “starting in the wild and woolly 1960s,” for the better part of three decades. Rumored to be a prominent member of the Hells Angels, Hedrick was notorious for his rough-and-gruff demeanor, but was well respected among townspeople for keeping order. His son took over the Pioneer in the 1990s and cared for it to the best of his ability through the mid-2000s. Comfortable with the idea of passing it onto another family, the owners sold the saloon to Noel Sheckells in December 2006. Shortly thereafter Noel reopened the general store. In 2007, the Pioneer Saloon was added to the State Register of Historic Places. It was an exciting milestone for the unincorporated town of 200, and the Sheckells family has made it a priority that its history be celebrated, not forgotten.

In the early part of 2013, the "Ghost Adventures" crew (Zak, Nick and Aaron) from the Travel Channel journeyed here to investigate a series of ghost stories associated with the Pioneer Saloon, including the 1942 death of Carole Lumbard. One of these stories is even tied to a hidden underground mine shaft (Figs. 10, 11, & 12) that runs directly beneath the saloon.

Another great story is that for 100 years, customers have been traditionally throwing change over the top of the historic bar. A lot of the change would land on the top, but  because there is a couple-inch gap between the back bar and the wall, many coins that went down there where no one had ever touched them. Once this was discovered, all kinds of coins, many dating to the late 1800s were discovered.

In summary, these are but a few of the many tales you can hear when pulling a stool up to the bar. Combined with bullet holes in the wall, the period pot bellied stove, the old poker tables, and the paper clippings that help to reveal the saloon’s long history, you will become immersed in the exciting era of the old Wild West whenever you visit this historic watering hole.
Email ThisBlogThis!Share to TwitterShare to FacebookShare to Pinterest
Posted by Ken and Connie at 9:57 PM