On 11/26 Blake Smith and I decided to travel to Calico Basin and hike the lower portion of the Kraft Mountain Loop Trail. Even though it was Thanksgiving weekend, in all the times I have visited Calico Basin area, I have never seen so many people there. We encountered roughly 150 people while hiking this trail. Most were in 'groups' that were free climbing the dozens of huge boulders that littered the trail along the lower edge of Kraft Mountain. Even though the entire loop is 3-1/4 miles long, we only hiked out about a mile into Gateway Canyon. It was a beautiful, sunny day in the mid-60's.
Email ThisBlogThis!Share to TwitterShare to FacebookShare to Pinterest
Posted by Ken and Connie at 7:34 AM


10/29/2016 Trip Notes:  Jim Herring and I rented a jeep and explored the area of the Rainbow Quarries behind Goodsprings and then traveled the length of the Cottonwood Valley Road north to hyway 160. Click this link to view pictures and read about this journey ... . Cottonwood Valley Road - 10/29/2016 Trip Notes
Email ThisBlogThis!Share to TwitterShare to FacebookShare to Pinterest
Posted by Ken and Connie at 10:18 AM 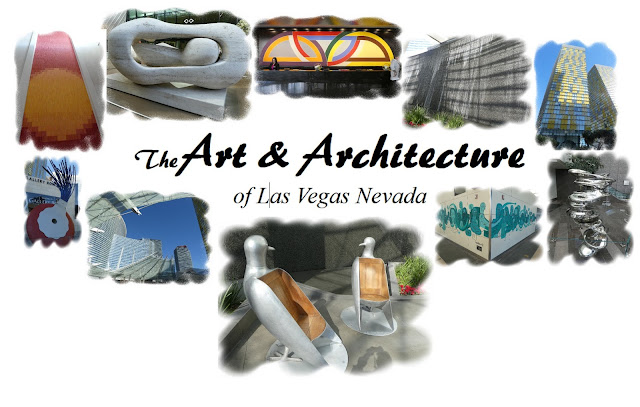 Earlier this year Jim Herring and I spent several hours touring CityCenter, the 16,797,000-square-foot, 76 acre collection of hotels, casinos and residential buildings on the Las Vegas Strip. In addition to CityCenter's 40 million dollar modern art collection, I hope to be adding additional pictures of art and unique architectural structures that I have collected over the past several years. If you haven't already visited this collection, Click on the picture/title above and it will take you to a post containing links to dozens of pictures and art installations and unique structures found throughout the city of Las Vegas.
Email ThisBlogThis!Share to TwitterShare to FacebookShare to Pinterest
Posted by Ken and Connie at 10:23 AM

{Click on an image to enlarge, then use the back button to return to this page}
This page last updated on 06/15/2017


Directions: From the Stratosphere Casino take a right onto Las Vegas Blvd south (the Strip) to Sahara Ave. Turn right onto West Sahara Ave (NV-589) and continue to follow W. Sahara Ave for 10 miles until it turns into Desert Foothills Drive. Continue on for about 4.5 miles and turn left onto NV-159 W Charleston Blvd. Continue to follow NV-159 (which becomes Blue Diamond Road) west for about 3 miles and turn right onto Calico Basin Road and drive north, then west, for about 1 mile to where the paved road makes a 90-degree turn to the right. Turn right onto Sandstone Drive and drive to the end and park in the parking area on the left. Distance from Point of Origin is 17 miles with a estimated one way travel time of 30 minutes.

Area and Description: Kraft Mountain (Fig. 01), is in the La Madre Mountain Wilderness Area, and is one of several minor summits in the Calico Basin section of the Red Rocks area that offers several short but enjoyable scrambling routes and excellent views of the surrounding desert peaks and canyons. At 4,714 it is almost due north from the end of Sandstone Drive bordering the north side of Calico Basin.

The Kraft Mountain Loop, also called Gateway Canyon Loop, circumnavigates Kraft Mountain, and is a 3-1/4 mile loop that is a moderate to strenuous hike with some rock scrambling. The route can be hiked in either direction from the two trailheads (Fig. 02). A series of use-trails run across desert flats to the the base of the mountain. Taking the trail heading east is easy to follow for the most part and passes an area that is scattered with dozens of large boulders (Fig. 03) that many people use to practice their rock climbing skills. Taking the northwest trail you immediately begin to gain elevation and is much more difficult - right side of (Fig. 04).

11/26/2016 Trip Notes: Blake Smith and I, looking for an easy hike, decided to travel to Calico Basin and hike the lower portion of the Kraft Mountain Loop Trail. Even though it was Thanksgiving weekend, in all the times I have visited Calico Basin area, I have never seen so many people there. We encountered roughly 150 people while hiking this trail. Most were in 'groups' that were free climbing the dozens of huge boulders that littered the trail along the lower edge of Kraft Mountain (Fig. 05 & 06). They all hike with large folded rubber mats on their backs which they spread on he ground below where they are scaling the rocks to protect them in case of falling. (notes con't below)


Trip Notes Continued: As we hiked along this trail (Fig. 07), weaving in and around the dozens of fallen boulders, the trail eventually reach a huge gouge that had been created by the Gateway Canyon Wash on the southern side of the trail (Fig. 08). At one vantage point, standing on the edge of the trail, the base of the wash was nearly 40 feet below the trail. Before the bend that leads into Gateway Canyon (Fig. 02) we came across a boulder that had some ancient petroglyphs (Figs. 09 & 10). Both on the way out and the hike back we encountered two groups of people riding horses (Figs. 11, 12 & 13). As we approached the lower portion of Gateway Canyon we encountered a few trees, some green vegetation and a view of Turtle Head Mountain (Fig. 14). (more notes con't below)

Trip Notes Continued:  On the return hike we stole a view of Las Vegas between two boulders (Fig. 15). We also got a great view of the backside of the Calico Hills and the small town of Calico Basin (Fig. 17). As we approached the trailhead area I captured this picture showing all the cars in the parking lot and along both sides of the road approached it (Fig. 18). Click picture to 'zoom' in.

Email ThisBlogThis!Share to TwitterShare to FacebookShare to Pinterest
Posted by Ken and Connie at 6:58 AM