On the way back from Tommy's cancer operation in Sacramento, CA, we stopped by the nursing home in Placerville to visit mom. Even though Connie and I hadn't seen for for a couple of years, she still recognized us in spite of her Alzheimers and dementia. Nearly 94 she look surprisingly well. 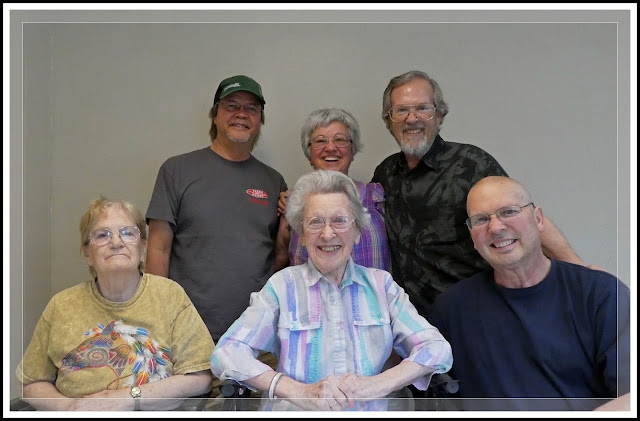 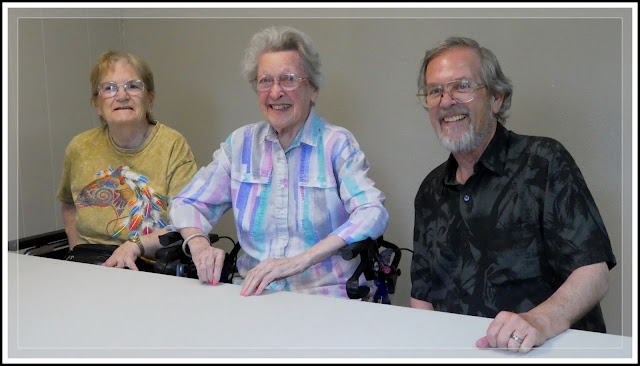 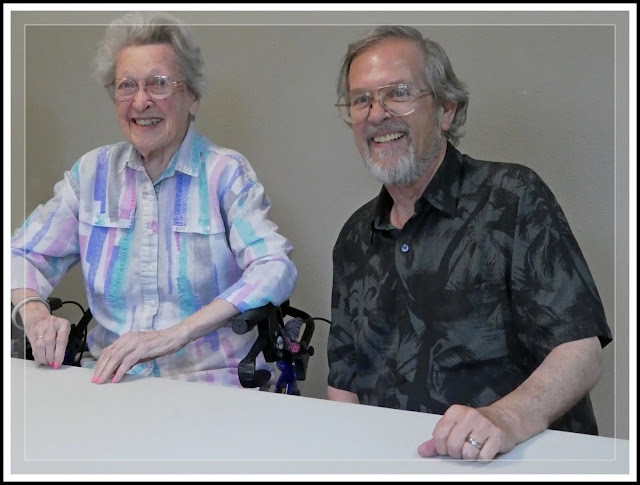 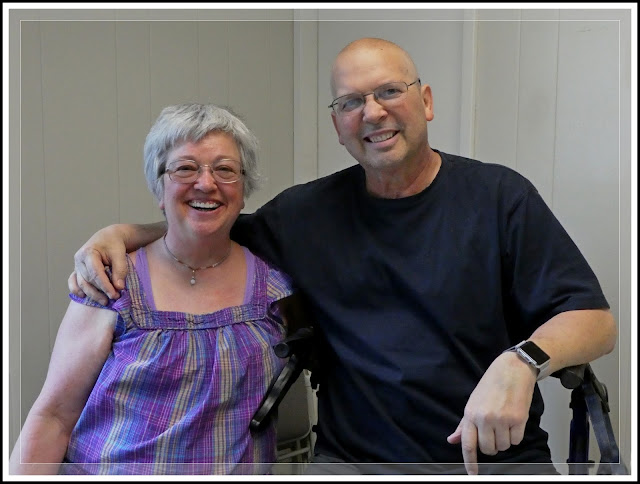 Email ThisBlogThis!Share to TwitterShare to FacebookShare to Pinterest
Posted by Ken and Connie at 9:34 PM

{Click on an image to enlarge, then use the back button to return to this page}
This page last updated on 06/15/2017
07/01/2016 Trip Notes: We stopped here on our way to visit Lee Canyon. Even though we didn't stay long and only hiked about a third of the trails, we go to get witness some nice views (Figs. 01 & 02) and experience several things we had not seen before. While hiking around the pond, I took these pictures of dozens of crayfish skirting the edges of the pond (Fig. 03). Even though I had seen some on a previous visit here, there were never this many nor this big. Bob found a couple of small toads along the edges of the trails (Fig. 04). In addition to dozens of lizards (Fig. 05), Ij also spotted several rabbits (Fig. 06).

Email ThisBlogThis!Share to TwitterShare to FacebookShare to Pinterest
Posted by Ken and Connie at 10:35 AM

{Click on an image to enlarge, then use the back button to return to this page}
This page last updated on 01/29/2019

Directions: Overton is located approximately 90 miles NE of Las Vegas. From the Stratosphere Casino head northeast on Las Vegas Blvd about 3 miles and turn right to merge onto US-93/95. Go 12.5 miles and Merge onto NV-564 E/W Lake Mead Pkwy via Exit 61B. Heading east on NV-564 (Lake Mead Blvd) go over the mountains (passing between Frenchman Mountain to the south and Sunrise Mountain to the north) to the park entrance station. Pay the entrance fee ($5 per car or an annual pass), and proceed to the T-intersection with Northshore Road (NV Rt 167) and Lakeshore Road (NV Rt 166). Bear left and drive north on Northshore Road (NV 167) towards Overton, NV. The museum is located on the left, 8.2 miles beyond the Valley of Fire Road.

There is an outdoor reconstruction showing what an Anasazi pueblo may have looked like many centuries ago. This outside area contains an exact replica of several wattle-and-daub Anasazi pueblos (Fig. 02). Peering into the windows and doors of these structures reveals great detail, such as exposed roof rafters, support beams, hearths, etc. As long as you don't climb on the fragile tops of the structures, you can crawl inside and imagine life from the Anasazi perspective. The Anasazi are a well known and interesting prehistoric culture that existed in prehistoric times throughout the northwest part of the Southwest US. After occupying vast tracts of the Southwest the Anasazi abandoned many areas leaving behind their ruins, pottery and other signs of substantial and long term occupation.

Inside there are numerous displays depicting the excavations of the sites, incredible artifacts unearthed during the CCC project, pictures of the historical excavations, an excavated pit house, and a wealth of information on the ancient peoples that inhabited this area from more than 12,000 thousand years ago, up to present day times. Pottery, shells, jewelry, baskets, and many other examples that showcase the history of these early inhabitants are on display throughout the museum (Fig. 03). The Lost City Museum was not the original name; it was actually called the Boulder Dam Park Museum. It was originally named for Boulder Dam, [now Hoover Dam]. It was originally built and run by the National Park Service. In 1952, the National Park Service wanted to turn over operation of the museum to the State of Nevada, and in 1953, the Lost City Museum became a state-run museum. Since it was built in 1935, two wings have been added to provide additional exhibit space. The museum was added to the National Register of Historic Places in 1996. See below for more on early habitation of the area and the details on the Lost City Archaeological Excavations.


07/25/2016 Trip Notes: After visiting and hiking around the Overton Wildlife Management Area, Bob Croke and I visited the Lost City Museum in Overton, NV. Though not all native to the Lost City area, they have one of the best displays of ancient pottery and woven baskets. The two jugs on the left side of (Fig. 06) are examples of Puebloan pottery canteens with lug handles for twine or hide straps and are dated about 1000 years old. The jug in the bottom right corner of the collage is a Southern Paiute woven water jug that was coated with pine pitch for waterproofing.  The fine baskets in (Fig. 07) are believed to have been made by Southern Paiutes living in the Pahrump Valley during the 1920's and 30's The stitches per inch range from 21 to 42. Four of the baskets have been identified to the work of master basket maker Hanna Bruce. The quality of these woven baskets are just amazing (Fig. 07). (Fig. 09) is an example of an ancient fire board that was use with a bow drill commonly was used to make friction fire.


History of Early Habitation: The first inhabitants of what is now Nevada arrived about 12,000 years ago. They were fishermen, as well as hunters and food gatherers, for the glacial lakes of the ancient Great Basin were then only beginning to recede. Though numerous sites of early human habitation throughout the state have been found, the most famous is the Pueblo Grande de Nevada (also known as Lost City). No one really knows why the Anasazi culture left the Moapa Valley. Typical indications of warfare, disease, invasion and other factors which would likely account for such a shift in population are not apparent. In more modern times, four principal Indian groups have inhabited Nevada: Southern Paiute, Northern Paiute, Shoshoni, and Washo. Eventually, Mormon settlements were started here and in Las Vegas Valley. Even though the Las Vegas Mission failed, many of the farming communities (such as St. Thomas) to the north succeeded. Famous for its rich history of silver mining, coupled with the discovery of gold, Nevada has always been recognized as a mining state. However, few people realize that the first miners in Nevada were Native Americans, starting as early as 2,000 years ago. Because there was no knowledge of "smelting", these prehistoric miners were more interested in minerals such as salt, turquoise, magnesite and other earthly minerals. A large magnesite deposit is located about three miles south of Overton, near the center of the Lost City. The Anasazi used it as a white slip for pottery.

History of the Lost City Archaeological Excavations: In 1924 two brothers from Overton, John and Fay Perkins, reported the finding of ruins they found scattered along the banks of the Muddy River in Moapa Valley. In November of the same year, a delegation headed by Mark Raymond Harrington begin excavations. Harrington determined that the area appeared to be an active Anasazi community from 300 B.C. to A.D. 1150. He recognized the ruins as the Basketmaker and Puebloan and related them to archaeological sites found throughout the Four Corners region. Harrington and his crew concentrated excavations of the Lost City sites in an area east of the Muddy River that stretched about six miles north of the confluence of the Muddy and Virgin Rivers. Harrington excavated an important part of Lost City in 1924, 1925, and 1926. As many as fifty to one hundred people lived there in about 1000 to 1050 A.D. Harrington found forty-five homesteads, most of which included "living rooms" with hearths, associated with a line or curve of smaller store rooms. One or two families lived at each. The structures were built of mud and sandstone, with clay floors. None were more than one story high. At least forty-five people were buried at the excavation site, later named Main Ridge. To accompany their journey into the afterlife, most of them were buried with pottery bowls, jars, or canteens, serving as containers for water or food such as corn, squash, amaranth seeds, and mesquite beans. Some also had baskets, cotton cloth wrappings, or turquoise or shell beads.

The exploration of the Lost City was not limited to the excavation of ruins; it also included the investigation of nearby prehistoric salt mines (Fig. 05). One of the salt caves was first noted in 1827 by explorer Jedediah Smith. During archaeological excavations carried out in the 1920's, Mark Harrington discovered that there were four salt mines located along the lower Virgin River along the border of Nevada and Arizona within fifty miles of the Lost City. During the 1925-26 field season, Harrington and his crews excavations recovered pottery, stone clubs, corncobs, net bags, and yucca sandals. These cultural materials were found in the mines that varied in depth from 5 to 8.5 feet. This prompted Harrington to propose that mining had been taking place there for more than 2000 years. Salt was probably an important trade item out of the Lost City. The archaeological explorations of the caves revealed salt-mining tools left behind by prehistoric miners. Prehistoric mining artifacts that were recovered from the salt mines included picks, hammers, fiber net bags, and torch fragments. The Ancestral Puebloans mined salt from caves and were able to use the salt not only for food preparation, but as a trade item as well.

In 1934 the National Park Service sponsored a large-scale archaeology project to save the finds of the Lost City sites from the effects of the construction of the Hoover Dam; the creation of Lake Mead would cover these excavated sites. Note: Some of this information were excerpted from the publication, Nevada’s Lost City.

(OPTION 1) Each show is designed to run automatically in place, without leaving the current browser window. If the show is not already running, just click the large "Play" button in the middle of the picture and let it run.

(OPTION 2) Running the cursor over the picture being shown will PAUSE the show and bring up a navigation bar at the bottom of the slideshow window with Pause, Forward and Back buttons, allowing you to start, stop or manually forward or back up pictures one at a time.


Slideshow Description:
The slideshow above contains 23 pictures that were taken at the Lost City Museum in Overton, NV.


Note: Every attempt is made to provide accurate information, but occasionally depictions are inaccurate by error of mapping, navigation or cataloging. The information on this site is provided without any warranty, express or implied, and is for informational and historical purposes only.

Email ThisBlogThis!Share to TwitterShare to FacebookShare to Pinterest
Posted by Ken and Connie at 9:47 AM