{Click on an image to enlarge, then use the back button to return to this page}
Picture Notes: With its small red berries, I found this plant to be quite beautiful. I photographed it on 01/20/2011 on a recent hike to eastern end of the Las Vegas Wash with the Henderson Heritage Park Senior Facility rock-hounds. As it was growing fully exposed on the side of the trail several hundred feet above the water, one would have to assume that it is a very hearty plant.
Area Description: A natural wetlands area, the Las Vegas Wash is a tributary that channels stormwater, urban runoff, shallow groundwater and highly-treated wastewater into the Las Vegas Bay at Lake Mead. Approximately 2 percent of Lake Mead's water comes from the Wash., but more important is unique role it plays in the valley's ecological picture. Its natural wetlands and marshy qualities help polish impurities from the water flow. In addition, it is home to a variety of plant and animal species. Over the past 20 years its banks have suffered large-scale erosion and are in danger of further erosion which could eliminate the channel. Efforts are currently under way to strengthen the banks and expand the Wash. For more info see Wetlands Park Nature Preserve at http://www.clarkcountynv.gov/Depts/parks/Pages/wetlands-park.aspx.
Description: Desert Holly (Atriplex hymenelytra) is a species of saltbush that is a perennial shrub native to the Southwestern United States and the Mojave Desert. This is a desert-dwelling shrub, reaches heights of between 1.5-3 feet. Although not a true holly, desert holly gets its name because its leaves look like holly. It is generally a rounded bush covered in distinctive reflective silver-gray, twisted, oblong, many-pointed leaves. The color is from salt left on their leaves, this helps reflect the light and therefore reduce the amount of water lost. The small reddish fruits are enclosed in disc-shaped bracteoles after flowering. It is a common component of shrub communities on alkaline and saline soils at low elevations in the Upper Sonoran (Mojave Desert Scrub) life zone.


Picture Notes: On 05/20/2015, I captured this picture of a Desert Holly growing right out of a rock in a wash on the Cliffs Hike at the China Ranch & Date Farm, south of Tecopa, Callifornia. This is only the second time I have spotted one of these plants in all of my years of hiking. The fact this area is extremely dry may account for its pinkish color and the fact that its leaves were very brittle. 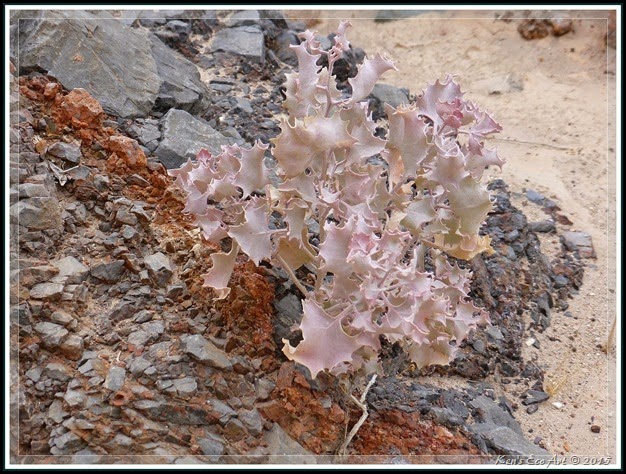 Postscript: I give thanks to Jason R Eckberg, Environmental Biologist with the Southern Nevada Water Authority for providing me with the name of this plant. It is a Atriplex Hymenelytra, a species of saltbush commonly called the Desert Holly. This gray-white sub-shrub grows from Utah to southern California. This is a desert-dwelling shrub reaching heights of between 1.5-3 feet. It is generally a rounded bush covered in distinctive reflective silver-gray, twisted, oblong, many-pointed leaves. The fruits are enclosed in disc-shaped bracteoles after flowering. The toothed leaves and the small reddish fruits borne on the plant give it a passing resemblance to the unrelated European holly.
Email ThisBlogThis!Share to TwitterShare to FacebookShare to Pinterest
Posted by Ken and Connie at 5:29 PM